Plague Game – Spread the Virus and Kill the Host

Do you have an interest in tapping games? Are you looking for a game that deals with viruses and infections? If yes, then this plague game is worth checking out. Idle Plague is a fun game in which you get to play as a virus and infect the different organs of your host. It lets you replicate the bacteria and microbes of the virus by tapping on the device. You will get the chance to recruit new microbes and bacteria that will help in spreading the virus quickly through the host's body. Beware that the immune system of the host is going to fight back. You will have to attack and defeat it to continue the spread of the virus. 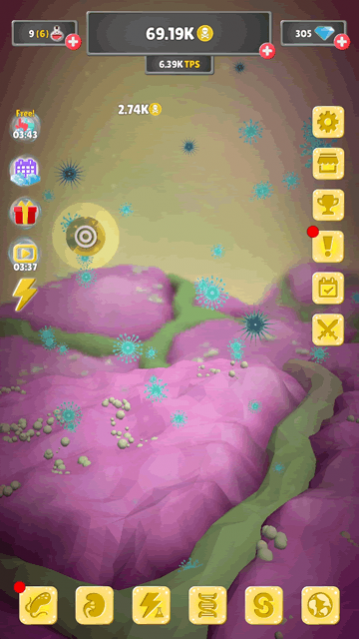 Idle Plague has fast-paced gameplay that is well-supported by some stunning visuals and graphics. You will see the microbes multiplying in number inside the different organs of the host bodies. This plague game has excellent sound effects too that set the mood for the tapping frenzy. As for the controls, they are as simple as they come. You just need to furiously tap on the screen anywhere you want except the menus to reproduce the microbes. The faster you tap your fingers, the quicker the number of microbes will increase. You will have to keep on upgrading the microbes to enhance the rate of reproduction. As the number of microbes increase, you will get the chance to recruit new and more powerful bacteria that can expedite the spread of the virus. 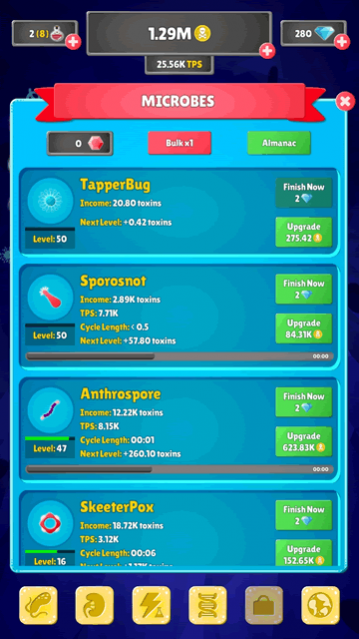 This plague game gives you the chance to infect multiple organs of a host's body. To move from one organ to the other, you need to first upgrade the existing bacteria you have and reach a particular number of microbes. You can see the total number of microbes you have been able to reproduce on the counter at the top of the screen. Once all the conditions for the spread of the virus to the other organ have been met, you will be free to move to the next organ. You can always visit the previous organ anytime you want. As you continue infecting new organs, new bacteria will become available to you. You can fuse microbes together to create powerful microbes too and research mutated genes of the virus. 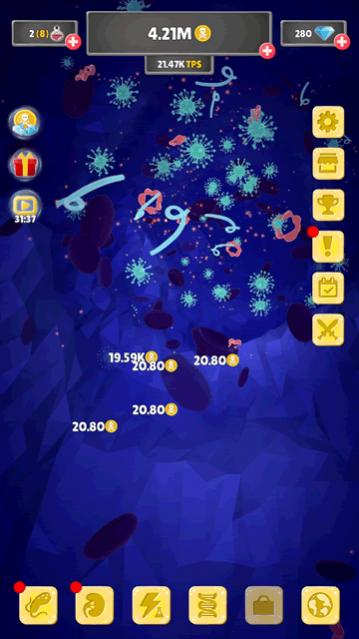 Idle Plague has been designed keeping the human body in mind. This is why the spread of the virus generates a response by the immune system of the host. After every few minutes, the white blood cells of the host will attack the virus and try to eliminate it. Your job will be to fight these cells and beat them down. You can do this by tapping on the screen as fast as you can. This fight against the immune system will require some additional help. You can get it from special boosters that will further enhance the reproduction of microbes. There are daily quests available in this plague game too. You can complete them to earn prizes.

Idle Plague (Early Access) is a gaming app that is marketed to people who enjoy playing tapping games. It lets you become a virus and replicate inside a host's organs and mutate into different microbes until the host dies of the infection. It is a nice plague game to have on your phone that will keep you tapping on your device for hours on end.


Tell us your experience with Idle Plague

Rating:
Plague Inc.    FREE     Reviewed
Can you infect the world? Plague Inc. is a unique mix of high strategy and terrifyingly realistic simulation. Your pathogen has just infected 'Patient Zero'. Now you must bring about the end of human history by evolving a...
Continue to app

Rating:
Idle Infection    FREE
Tired of always saving the world? Sick of being the chosen high savior from the &quot;prophecy&quot;? How about playing the bad guy for once! In Idle Infection, you don't have to be the nice guy. Your job is to infect people with...
Continue to app